Facebook is one of the most used social media websites around the world. Facebook has billions of users and millions of active users that use the medium to connect with people online. Brands use the platform as a medium for promoting their brand and connecting with their target audience. The social media platform takes user safety very seriously. It gives an option for people to block users and accounts that they don’t want to contact for privacy or safety reasons.

Many times, businesses create multiple accounts to promote their business or brand. This requires them to have multiple accounts. However, Facebook blocks such servers and users from accessing Facebook due to the user policies and guidelines. This is to create a safe environment online without threatening any user. In such a case, a legitimate user may suffer. There are ways to get rid of the Facebook blocks. These ways shall be discussed in this article.

To unblock a Facebook user account, the best way is to use proxies. These tools can get the best results; however, the users should be careful. Facebook invests a large number of resources to maintain the security and privacy of the website. Facebook employees try to keep the website free from all types of spam accounts and phony businesses. Sometimes, Facebook blocks users for reasons unaware and unheard of. Many people have legitimate reasons to use Facebook account, but they are blocked by the networking site. In such a case, one can Use proxies to unblock the account and use the free social media forum. 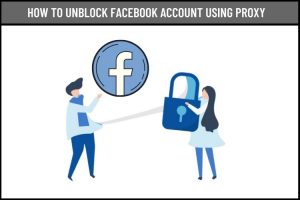 Facebook has a tendency to block accounts in bulk and it can also block individual accounts. For most people, proxies can be very useful to manage multiple Facebook accounts at the same time for legitimate uses. A Proxy setting will help in changing the IP address of the user by providing a unique IP that is completely different from the IP address provided by the Internet service provider. Using these proxies for unblocking the user’s accounts on Facebook will make sure that several Facebook accounts can be operated without Facebook cross-linking them in a negative light. This will reduce the risk of getting the user accounts blocked.

While using proxies for unblocking Facebook account, one must keep in mind that they should do research about proxies and how they work. The three types of proxies that can be used to unblock the Facebook account are using Shared proxies, Semi-dedicated proxies, and private proxies. For a Facebook user account unblock, shared proxies are not very much recommended as these proxies are less secure because they can be accessed by any internet user.

They are also free to use whereas, Private proxies are much more secure as they are to be purchased. On the whole, using free proxies for unblocking accounts on Facebook should be avoided. Free proxies might seem appealing at first, but they also have e-reader chances of getting blocked and banned.

This is why investing in Private proxies can be a safer option for you. Though they cost money, they can offer more security to the users and eliminate the risks of getting banned again. The cost of purchase can be considered as a business expense. They are also not very expensive from a business and marketing point of view.

There are two kinds of a user who need a proxy server:

The two kinds of users that have a great chance of needing proxies for unblocking accounts on Facebook are businesses and individuals who are promoting themselves as a brand. These users are more often prone to facing a block on Facebook which is why they will need to use a proxy server to unblock and prevent the risk of getting banned. Shared proxies are those that are free for use and all internet users can use these proxies to change their IP address. These proxies can be effective, but they are not really secure. This is where semi-dedicated proxies and private proxies can help to remain secure.

Why do we need the proxy to unblock Facebook?

Users who have been blocked from using Facebook can use proxies to have access to the platform. Rather than accessing the internet, the proxy will take the data and pass it in. These proxies will hide the original IP address and allow the users to access Facebook if they have been blocked.

A proxy will shield the original IP address. They will make the websites believe the new IP address provided will bear the real identity and location. This is why using proxies through Facebook can be a quick and efficient method to operate multiple user accounts at the same time. These proxies will unblock accounts and also scrape the website for any relevant content.

A useful tip to Avoid Being Banned

Another way to avoid getting banned or blocked on Facebook with a proxy is that after changing the IP address, one must stay vigilant and cautious while posting content and using the account. Avoid messaging people directly try via messaging option and stick to posting on the wall.

Connecting pages should be avoided at all costs because it might result in a ban. Connected accounts can prove that a user is using multiple accounts.

Do not overdo with likes and dislikes and comments. Real users use Facebook in moderation and that’s the best way to avoid getting blocked.

Posting in moderation can help attract an audience, but over-posting content can also lead to a block on Facebook.

There have been no private messages received

Private messaging on Facebook to multiple users at the same time can be considered spam. Facebook blocks such accounts so beware of sending personal messages.

Private messaging on Facebook while promoting a business or a brand is a big no.

Private is the best way to create new accounts on Facebook. It is one of the safest options to secure the account while automation.

3. Should you be using private proxies with your Facebook Accounts?

Yes, one can use private proxies with Facebook accounts. They are fast, reliable, and easy to use.

Open chat
Powered by
Hello,
Are You Looking For High Speed Proxies